skip to main | skip to sidebar

Gearing up for an interior. . . 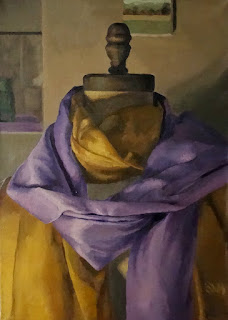 This is a study for a larger painting that I am pretty sure I am about to start.  It's going to be an interior, my first, and the dress dummy is going to play a major role. On verra, as they say.
Posted by sarah meredith at 1:47 PM No comments: 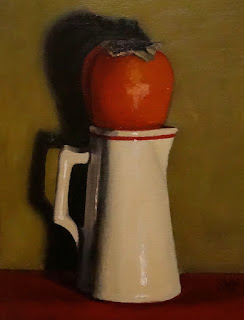 I have been home a lot this week due to the storm on the east coast, so I have experimented a bit.  I have long suspected that there is a more streamlined strategy for making small paintings than I have used previously, so this week, with time on my hands, I decided to try something new.  This was a three stepper.  First pass in large blocks of local color thinned only with turpenoid so that it would dry quickly.  Second, thicker paint, adjustment of colors and values, but still pretty general.  And today - the final addition of detail.  I know. This is not a new way of going about making paintings - but it has never been my way which has been less thought out, less directed, messier and surely less efficient.  Not that making paintings needs to be efficient - in fact, I don't actually think it should be efficient.  I just wanted to see whether I could stay on track.   There is another painting coming one of these days - a drapery study, but I can already feel my resolve to stay structured slipping away.  Anyway - this is a 6 x 8 inch painting of the pitcher that Jordan so sweetly gave me as a birthday present back in September.
Posted by sarah meredith at 1:21 PM No comments: 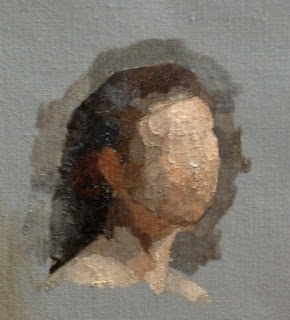 Michelle Tully creates gorgeous color studies which can be seen on the Studio Escalier website.  She posted one yesterday which inspired me to paint this one in my class at the Janus Collaborative School in East Harlem.  Michelle uses a full-color palette - with remarkable results.  Since we are using a limited palette, I painted this using just burnt sienna, ultramarine blue and flake white.
Posted by sarah meredith at 6:06 PM No comments: 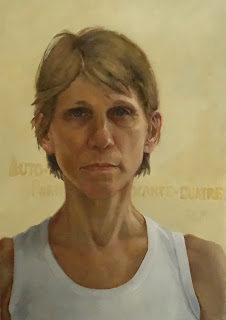 self-portrait, oil on linen
Posted by sarah meredith at 12:08 PM No comments: 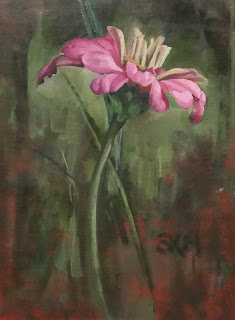 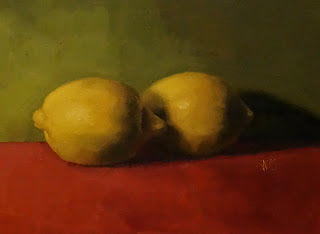 I keep procrastinating on a biggish self-portrait I am painting.  Procrastination is easy when there are lemons and zinnias around.  Both of the above are 6x8 on linen covered panels.
Posted by sarah meredith at 12:24 PM 1 comment: 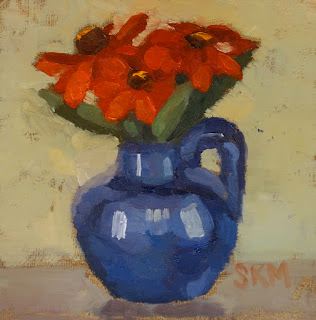 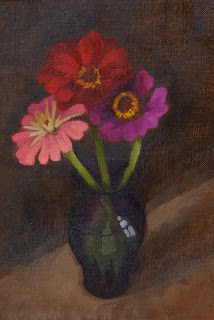 It is kind of hard to resist the zinnias that are blooming in my garden - despite all the weeds -  at the moment.  I don't think I have the patience for a seriously detailed "floral" painting, but I do have a good time with these quicker studies. They are the painting equivalent of are a quick saute of the endless zucchinis that are also hidden out there among the overgrowth, as opposed to a complicated and carefully crafted vegetarian dish involving something squash-ish.  And now, back to (still another) self portrait.
Posted by sarah meredith at 10:35 AM No comments: 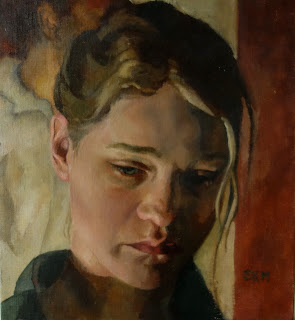 I had to finish this from a photo because Lillian got a job - sad for me, since she couldn't model any more and I loved her daily visits,  but brilliant for her because it is a cool job, part-time, and with it she can support the rest of her work as a theater director. The print on the wall behind her is only the second print I have ever bought, the first being "Christina's World" when I was twelve.  This one is of a heart-stopping little painting by Toulouse-Lautrec which was tucked away in a dark little room at the original Barnes collection in Philadelphia.
Posted by sarah meredith at 3:20 PM No comments: 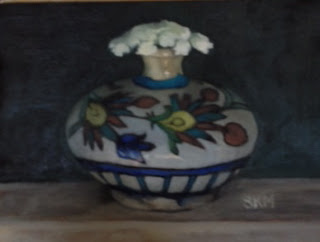 I bought this little vase from a store on Etsy called Adams and Adams.  I thought it might make a cute little still-life.  The flower is Queen Anne's Lace which blooms wildly and abundantly along the roads in Delaware County - and elsewhere too, no doubt. The painting is 6" x 8" on a linen covered wood panel and the photo is a little blurry since I took it with a phone.  My camera, sadly, is broken.
Posted by sarah meredith at 5:51 PM 1 comment: 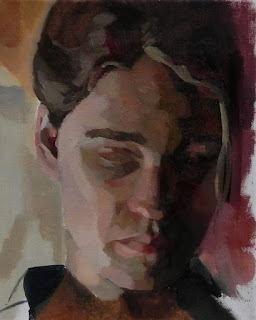 Here is the quick study, now back to the actual painting!
Lillian, reading.
Posted by sarah meredith at 8:39 AM No comments: 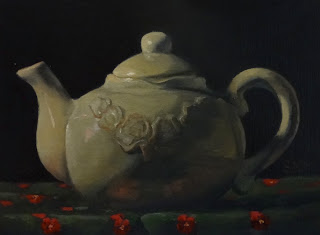 The entire village turned out for a vide grenier (empty attic) in the village of Belvy in the Ile de France.  There were families with kids and dogs, food vendors selling homemade black sausage and crepes and dozens of tables where people were selling everything from stuffed boars' heads to furniture to pieces of the family's heirloom silver.  I bought this teapot for 1 euro with the express intent of painting it when I got back to the States - which is what I have done.  6" x 8" on linen covered panel.
Posted by sarah meredith at 11:04 AM No comments:

studies outside of class 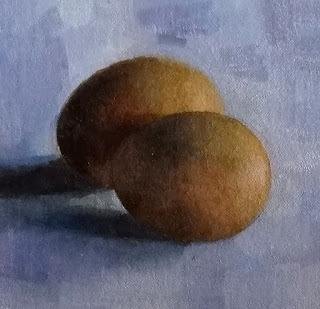 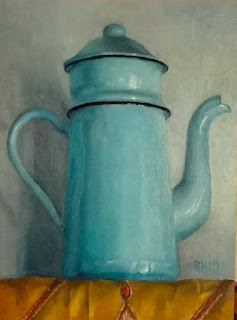 oil on linen covered panel
Posted by sarah meredith at 2:54 AM No comments: 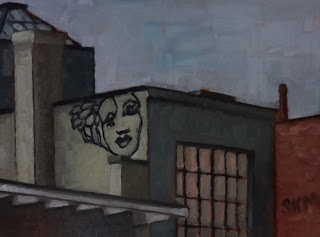 who is Silvia, what is she? 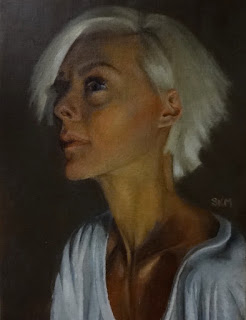 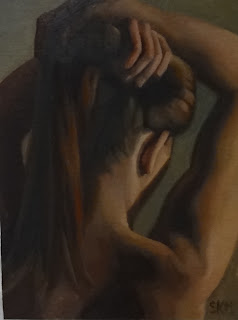 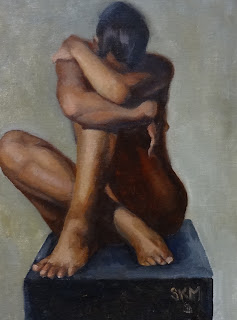 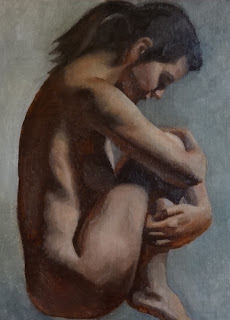 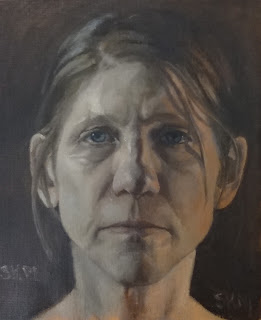 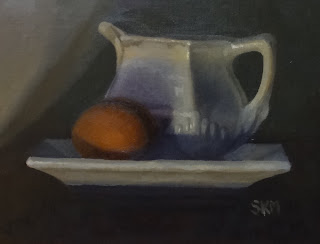 I know, but I find it nerdly amusing. I was about to put the pitcher away after the painting in the previous post, but then I noticed that because of the snow today , the light coming into my studio was blue and diffuse and therefore the shadow cast by the egg sort of melted into the surface of the pitcher. So I had to try painting it - with the above result. Again, it is on a 6" x 8" linen covered board.
Posted by sarah meredith at 2:24 PM 1 comment: 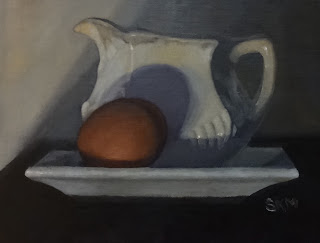 Another egg I am afraid, though this time with a lovely old ironstone pitcher that I bought at a junk store several years ago when I had a studio in the East Village. The plate they are sitting on came from Paris - an elegant and deeply chic little shop on the Rue du Bac. If you would like to buy this painting, you can - just click here, please.
Posted by sarah meredith at 8:31 AM 2 comments: 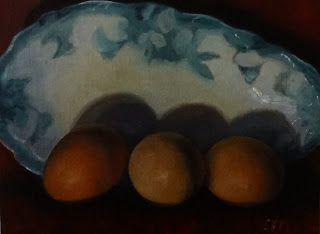 It is called procrastination, but instead of doing the laundry or cleaning out my closets, I paint eggs. I am working on a self-portrait as well, but I have hit the moment of chaos that seems to arrive somewhere in the middle of every painting. So what do I do? Get out the eggs. Now the eggs are painted on a 6" x 8" linen covered panel and it is time to get back to work on the SP.
Posted by sarah meredith at 3:06 PM No comments: